Identify which pronoun belongs in the blank.  The color is the key.
Black Panther's real name is T'Challa, king and protector of ____1____ fictional African nation of Wakanda. Along with possessing enhanced abilities achieved through ancient Wakandan rituals of drinking the heart shaped herb, T'Challa also relies on ___2___ proficiency in science, rigorous physical training, hand-to-hand combat skills, and access to wealth and advanced technology to combat ___3___ enemies. 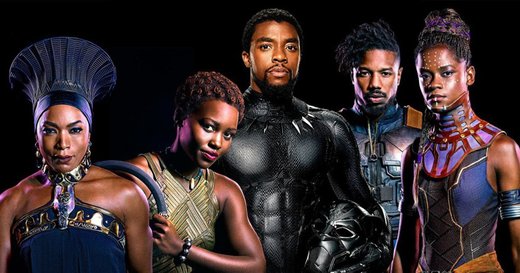 Centuries ago, five African tribes war over a meteorite containing vibranium. One warrior ingests a "heart-shaped herb" affected by the metal and gains superhuman abilities, becoming the first "Black Panther".  He unites all but the Jabari Tribe to form the nation of Wakanda. The Wakandans use the vibranium to develop ___4___ advanced technology and isolate themselves from the world by posing as a Third World country.

In 1992, King T'Chaka visits his brother N'Jobu, who is working undercover in California. The king learns that N'Jobu is assisting a black-market arms dealer (Klaue) with stealing vibranium from Wakanda.

In the present day, following the king's death, his son T'Challa returns home to assume the throne. During the coronation ceremony, the Jabari Tribe's leader (M'Baku) challenges T'Challa for the crown in ritual combat. T'Challa defeats M'Baku and persuades him to yield rather than die.

After a Wakandan artifact is stolen from a museum,  T'Challa, his general (Okoye), and his former girlfriend (Nakia) travel to Busan, South Korea, where Klaue plans to sell the artifact to a CIA agent (Everett K. Ross). A fight erupts, and T'Challa releases Klaue to Ross' custody where Ross learns about the technologically advanced civilization. Erik attacks and extracts Klaue as Ross is severely injured protecting Nakia. Rather than pursue Klaue, T'Challa takes Ross to Wakanda, where their technology can save him.

While T'Challa's sister (Shuri) heals Ross in ___5___ lab, T'Challa confronts his elder (Zuri) about N'Jobu. Zuri explains that N'Jobu planned to share Wakanda's technology with people of African descent around the world to help them conquer ___6___ oppressors.  As T'Chaka arrested his brother, N'Jobu attacked Zuri, forcing the king to kill him.  T'Chaka left behind N'Jobu's American son, Erik, in order to maintain the lie. Erik became a U.S. Black Ops soldier, adopting the name "Killmonger".  Meanwhile, Killmonger kills Klaue and takes ___7___ body to Wakanda. He is brought before the tribal elders, revealing his identity and claim to the throne.  Killmonger challenges T'Challa to ritual combat.  After killing Zuri, he defeats T'Challa and hurls him over a waterfall. After ingesting the heart-shaped herb, Killmonger orders the rest of the plants incinerated, but Nakia extracts one first. Killmonger prepares to distribute shipments of weapons to operatives around the world.

The queen and others flee to the Jabari Tribe for aid. They find a comatose T'Challa,   Healed by Nakia's herb, T'Challa returns to fight Killmonger, who dons his own Black Panther suit.  Shuri, Nakia, and the Okoye join T'Challa, while Ross remotely pilots a jet and shoots down the planes carrying the vibranium weapons. M'Baku and the Jabari arrive to reinforce T'Challa. Confronted by Okoye, W'Kabi and his army stand down. Fighting in Wakanda's vibranium mine, T'Challa disrupts Killmonger's suit and stabs him. Killmonger refuses to be healed, choosing to die a free man rather than be incarcerated.
​
T'Challa establishes an outreach center at the building where N'Jobu died to be run by Nakia and Shuri. In a mid-credits scene, T'Challa appears before the United Nations to reveal Wakanda's true nature to the world. In a post-credits scene, Shuri helps Bucky Barnes with his recuperation.